This weekend Fiona and I decided to lead our first MITOC hike together and take a group up the notoriously difficult Tripyramid Slides. The North slide is the more challenging of the two with the bottom half comprised mostly of granite slabs that can be extremely slippery when wet. We found this out the hard way as it had rained the day before, leading us to a false sense of security on the cloudy but otherwise dry morning. While I sometimes feel that the difficulty of trails is overstated in the guidebook, this one is not to be underestimated. The slide is quite committing, and quickly makes a retreat to the bottom an unfavorable option with hundreds of feet left for the summit. Below details the full trip from start to finish.

We left Boston around 6:30am and arrived in the parking lot by 9:00am with a quick stop at Dunkin Donuts to go over logistics and get delicious trail snacks. We were hiking by 9:15am along the well maintained dirt road that comprises Livermore Trail for the first few miles of the hike. We made good time enjoying the fall foliage and easy warm-up before the real climbing started.

We reached the turnoff for the North Slide Trail and made a decision as to whether or not it was dry enough to attempt the slide. With the dry leaves around us and the sun starting to poke through the clouds, we opted to attempt the slide figuring we could always turn around if it proved too slippery. 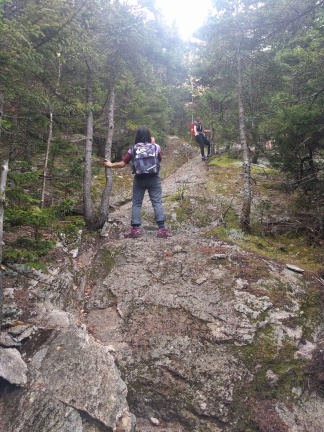 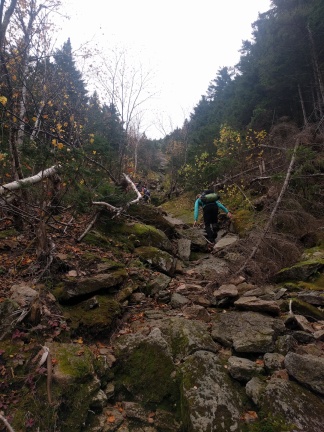 After 10-15 minutes of gradual but steady elevation gain we reached the base of the slide, marked by the sudden increase in slope and exposed rock. The rock here was covered in moss and slippery from the leaves and rain the previous day, but was still passable. There was a worn herd path / trail to the left of the slide, and it was difficult to tell which of the two was the “official” trail without any noticeable blazes or Cairns. We continued up the slide sticking to the rock as much as possible to minimize any additional wear on the herd path. Only a few sections of the slide proved to be too treacherous to force us off into the woods.

A few hundred feet higher, the slide opened up allowing us easier and obvious travel along the granite slabs. They still proved to be quite slick and moss-covered in places, but the entire team was moving quickly and efficiently so we opted to continue up the slide. It was approximately here that we began to feel committed to the slide, figuring that retreating down the granite slabs to the base would be treacherous.

Eventually we reached a sort of “book” in the rock with granite slabs on either side and no herd path in the woods. A wider section of slide existed to the right and for a moment we were unsure if we had stayed off the trail to the left. We noticed a blaze right in the middle of the book, clearly marking the way forward. The book proved to be the most interesting and challenging part of the hike, requiring a chimney-esk butt-shuffle to conquer.

The book also marked the end of the granite slabs, but not nearly the end of the slide. After a quick snack we found ourselves at the base of the large scree field that makes up the top of the North Slide. Scree is the small boulders and rocks left behind after a rockslide or glacier comes through an area.

The scree proved to be much easier to traverse than the slabs, and even maintaining a solid 10-15′ between each hiker (to limit danger from loosed rocks) we made good time to the top of the slide. A large cairn marked where it was time re-enter the trees and end our slide adventure. Minutes later we found ourselves on the summit of North Tripyramid, a first time visit for most of our group!

The slog from North Tripyramid to Middle and South Tripyramid proved uneventful, with no notable views or happenings. We decided to push past the Middle and Tyipyramid summits for lunch and instead stopped at the top of the South Slide. We had great views of the surrounding mountains and took turns trying to use the compass to name them.

Going down the South Slide was much easier than the North Slide, and we made good time down the slide and back to the main trail. After a quick 2.2 mile slog we were back in the cars and headed to Boston.

One thought on “Tripyramid Slides Loop”